Posted on February 22, 2016 by protennisbetting

Success from week 6 continued in week 7.

From the 4 tipped players, 2 reached the final.

Cuevas bagged us a great 23.00 each way win. Cuevas played three lefties in a row and got the best of them in long three setters. Incredible result from Pablo, to win his first ever ATP 500.

Ram was a long shot but came close to beating Querrey in the final. He went up a break in both sets but could not hold on. Each way success nonetheless for Ram as a 66 to 1 shot. Each way pay out 33 to 1. All outright picks should be played as each way as this is how my picks are valuable and how outright betting can be profitable.

ATP 250 Brasil Open Sao Paolo
After the strong field at Rio, the Brazil open in Sao Paolo is a lesser field without the short priced favourites we saw in Rio. There is one player in the draw who I up front expect to do well. Delbonis has a favourable draw and played a good Rio tournament. He played well in his two victories and lost in two tight sets against Rio winner Cuevas. My database gives him a great chance to make again a deep run in the Brasil Open. Delbonis is a previous winner in Sao Paolo and is available for 10.00 and should be played each way.

Elias is in truth a long shot. However, Sao Paolo has produced long shot winners in the past. As it is the final tournament on the South American Golden Swing we see a weakened field and potential upsets. Elias has come through the qualifiers in BA and Rio. He now has a draw that can see him go deep as his confidence is up there. He had a great run in October/November 2015 at CH level and he is bound to build on this at ATP level 250 in 2016. Elias tipped up this week at 101.00. 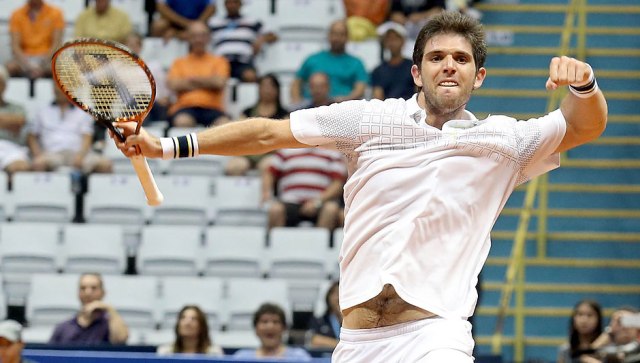 ATP 500 Acapulco
Its basically pointless to add my analysis for Muller after he was dispatched against all odds by a revamped Young. Odds on Muller shortened to 1.25 before the start but he was nowhere near a level that could see him make a run. Disappointing pick and the
67.00 price on Muller before the start was more than right.

My last two picks of this week will be again Acapulco as I can not see any value in predicting who will be at the other side of the net against Djokovic in the final of Dubai. Then, with Each way value at 1/3 the odds and Djokovic as low as 1.3, it is not a tournament for outright prediction.

However, Acapulco sees the two finalist from last year as the No.1 and No.2 seeds. Ferrer, the defending champion and Nishikori last year’s finalist. I expect Ferrer to do well but his price is rather short and he has to face some top competition. If Dolgopolov is not fully fit, his price is perhaps worth a bet but a fit Dolgopolov is a tough encounter in the last 16 and so is the rest of his potential road to the final.

The bottom half has Nishikori as the outright favourite. However, after seeing his display in the first round, his fitness is a major concern. He needed medical attention and his wrist to be re-taped after giving up a break in the second set. Today, Nishikori was announced as headlining Japan’s Davis Cup team to face Great Britain next week and this fuels my reservation for a deep run in Mexico. Even though, Nishikori will look to defend some of the 250 ATP points he earned last year, if he were to make the final it would negatively affect preparation and fitness for the Davis Cup.

Young impressed in his first round win over Muller and he will fancy his draw to the semi finals. The slow hard court of Acapulco favours Young as well against strong serve players and he is currently still available for as high as 67.00, at each way 1/2.

Robin Haase cruised in the second round against an Mexican qualifier. Haase can trouble any one in tennis with his talent and he likes the type of hard court used in Acapulco. The Dutch veteran has been focused this year and I expect a deep run in an ATP tournament to be around the corner. He should be able to get to the quarter final and give the like of Ferrer a run for his money. I do not see the top favourites here as much value and Haase in his current form can cause an upset in the top half of the draw.