A wonderful display all around from Murray banked us a nice each way winner in Rome.
Finally after a string of attempts Murray managed to get the better of Djokovic. This means that 2016 is well into profit and expect more of the same successful tipping in the upcoming months.

One week before the start of a Grand Slam means likelihood of upsets and retirements. Kohlschreiber and Baghdathis already withdrew before the start. Last year’s winner Bellucci is my outright tip for this tournament. He is clearly comfortable at this tournament and said he enjoys the fast conditions. His draw is a difficult one but he showed very strong play in Rome, including his incredible 6-0 first set win over Djokovic.

Tomas Bellucci at 21.00 for €10 each way available at Betfred

Weak field this year in Nice. Thiem is defending champion and he is clear favourite. However, Thiem will want to make a run at Roland Garros and his level has decreased lately, likely due to the high number of matches played this year. He needs a break before Roland Garros and I do not expect him to fancy a title run again. This opens up the draw for other players. I expect Guido Pella to be up for a run here. He could frustrate Fognini and Paire easily which would see him in the semi final, against possibly Thiem who he beat comfortably this year on the clay in Rio. 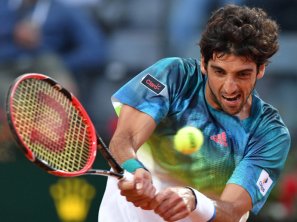